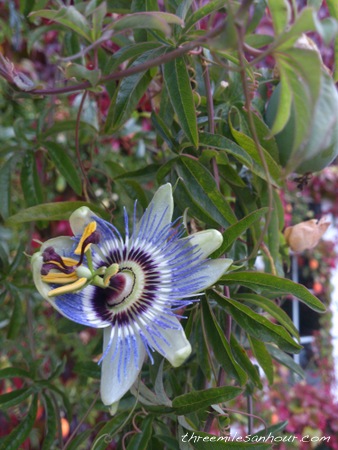 Last week was a little bit crazy. I was working for my third consecutive year at the Henley Literary Festival in the small town of Henley-on-Thames about an hour west of London. As always, the week absolutely flew by. I’ve learned that when time is measured in 20-45 minute increments, it is almost impossible to slow it down. It’s a good thing and a bad thing. I was monstrously productive in the 20 minutes of chaos we had between every event. But it took me half of the down time I did have to relax and enjoy a small break before I had to ramp up again for the next 20 minutes of madness.

I did manage to sneak in some moments of relaxation though: I wrote several overdue cards to friends, I journaled (a lot), I cuddled with the softest puppy I have ever met, I had a (somewhat) leisurely lunch with my favourite boy, I went for a morning stroll by the river and I sent a postcard to my new friend in Paris. Oh yeah, and I was interviewed by Robert Elms on BBC London.

Half lab + half husky = 100% adorable; I tried to find good boat names along the river but it was a slow day, apparently. Le Ketchup was pretty cute though; a happy munchkin after getting his book signed; a view of Henley

The benefits of being behind the scenes at a literary festival are that you get the chance to meet people you might not otherwise. Highlights included:

One of the many tiny glasses of wine I drank; a peek at the world’s best brownies (Gower Cottage!); a Thai tappas platter that made my day; and the biggest Scotch egg I have ever seen.

I also had the immense pleasure of finding a mermaid statue along the riverfront. I never thought I would get so excited about that but, as you know, I have this postcard project… For the reader who received this card, you are certain to know who you are. I hope you enjoy it with a bottle of wine and some nice gooey brie.

I couldn’t figure out if she was actually a mermaid because she is kind of stepping out of her fish skin and walking away. I like to think she gets one day on land every 10 years and this is what the transition looks like.

The biggest event of the week, though, was being on the BBC. I never thought that might be a thing that I would do. Even better that it started because I got an email from them saying “we’ve heard about you and would love to hear your story.” That is quite a crazy thing to experience.

I am pretty good at talking and I am pretty good on my feet, so I wasn’t too nervous until I got into the office, sat down in front of the phone and had to wait for it to ring. Then I started freaking out. I couldn’t ignore the fact that I was about to be interviewed live on the radio without having any idea how he might approach the topic. Luckily, he was a very easy person to talk to and, as he is genuinely interested in London and the congestion zone project, I relaxed right away and just enjoyed having a fun one-on-one chat about the walks I did.

All in all, it was a pretty fun-filled week!

I also bought my ticket for a visit to Muscat in 15 days, so I am sure to have more stories to tell and more postcards to send. If you want to be the lucky recipient, send me your address and it’ll be on its way in a jiff!