Long time no chat. As it turns out, there are certain things in life that suck the creative life force out of you pretty quickly. I have been in the thick of one of those things for the last month and a half and am happy to announce that I finally walked out the door and will never look back.

Hooray, huzzah and all the other happy, onomatopoetic sentiments one can muster!

This liberation has allowed my mental imagery to shift back to bursts of color, fanciful designs and long-shelved project concepts. One such whim is a series of Oman-based postcards I’ve had floating around in my head for quite some time. I saw visions of these over the summer, but, as is so often the case, when my vision is clearest my resistance is strongest.

I am NOT cool or talented.

I’ve talked about this before: it seems that making art is really about letting go of what we think we have to be in order to be an artist so we can just get on with making art.

My resistance stems from the fact that, when presented with a fantastic image in my mind, my hand struggles to render it on the page. It’s a real battle, folks. I want so much to share what I’ve got in my head, but the only tools I can think to do it with seem to lock up and refuse to cooperate the minute I touch them. Woe is me.

Here’s where the letting go comes into play.

But maybe I’m destined to draw the best damn pig ever. Maybe my style is abstraction, imperfection, essence as opposed to replication. Maybe that’s just who I am. Maybe that’s my thing, the way I share what’s in my head.

There are talented people in the world – incredibly amazingly talented people – and, rather than envy them, I would like to be proud of them, encourage them, support them, send people their way because they deserve to be found and fawned over.

The only way I can have the energy to promote other people, however, is if I put myself out there as much as they do. When it comes down to it, we all feel the same way when it comes to sharing our work. We all respect and appreciate other people with beautiful talents. And we all battle imposter syndrome every time we sit down to the page. All of us.

We’re all constantly re-learning that there is no spoon. There is no creative blessing that makes some people artists and other people not. There’s only art. Making stuff. Trying things out. Experimenting. Practice. And, above all, having fun and not worrying about the end result.

Letting go and riding on the wings of your creative voice. That’s where the joy is at anyway, isn’t it? For some that might be in mastering the details of a portrait, for others it might be expressing their emotions with flashes of paint across a wall. For me, making art means playing with whatever ideas come to mind in that moment without concern about the final product.

That makes it sound so easy. Oh boy. Let me tell you right now that it is not. Letting go of the dissonance between the images in my mind and the replication I make on paper can be a serious battle – which is weird because the words themselves imply something so simple.

“Letting go” alludes to a muscular decision, an action that can be done with the zap of a few neurons. Maybe it can for some, but for me it feels like just the opposite. It often takes all the energy I can muster.

I’m working on this by trying to get myself to the page / the canvas / the paper as often as i can but, as you can see, I often avoid the battle all together by just disappearing from my creative pursuits for long periods of time. I’d love to say it won’t happen again, that I’ll see you regularly from now on, but that would just let us both down.

For today, at least, I have great news: I finally sat down with this postcard concept and gave it a whirl. Here’s the final product for you to oooh and ahhh over. 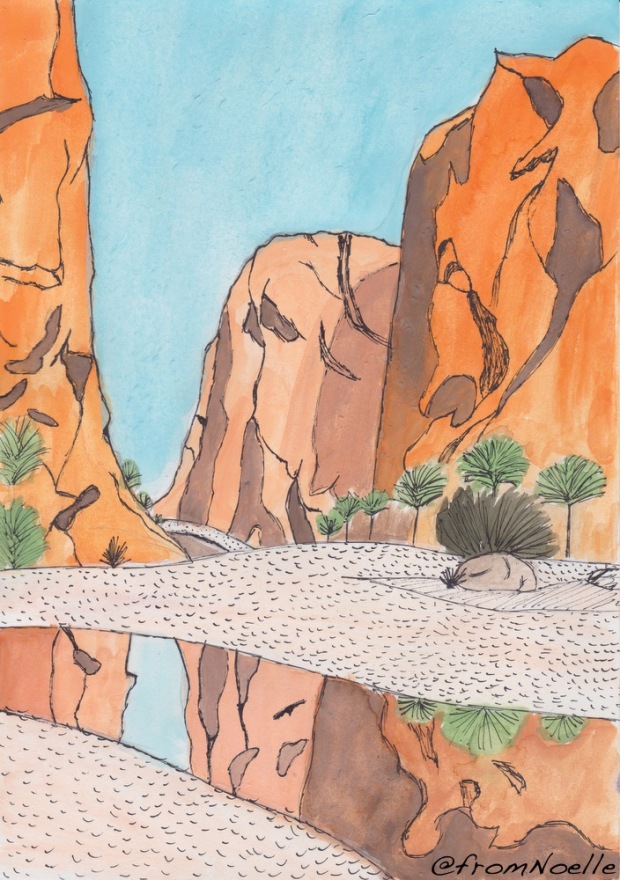 For those of you who don’t live in Oman, this is a painting of possibly my favorite wadi around: Wadi Shab (here’s where you appreciate the pun in the title of this post…I’ll wait…)

Because of the previously mentioned internal battle I have when I’m making art, I also wanted to share the process with you – mainly to show you that I really did plan to give up a few times along the way.

I’m learning that, to get to the end product, you have to make your way there in stages. Don’t laugh. It really was news to me. I always thought artists pulled up a canvas and worked their way from top left to bottom right, every line a perfectly finished product until they reached the end. That’s very much not the case. Each work is a lasagna of refinement. You start with the basics, the general layout, the big essential elements and work your way to the details (there’s a life lesson in there I’m sure).

The funny thing was, nothing looked like the end product until I actually got to the end. It wasn’t until I scanned the last image in and saw it on my computer that I thought “Well damn! That looks like exactly what I had in my mind! Whaddya think of that?”

I didn’t see that coming.

All along the way I wanted to stop and give up, frustrated that it wasn’t what I thought it would be, what it could be. But, for a change of pace, I didn’t. This one time I kept telling myself it was just practice, my first attempt and nothing more, that it didn’t matter what it looked like at the end because I was learning along the way.

I don’t know how I managed to let go with this one, but I’m pretty freakin’ pleased with the result. I’m even more pleased that I forced myself to learn my lesson once again while still having fun along the way. And I’m pleased that I could think of such a fitting title for this post while also making it a cheesy pun.

2 thoughts on “Not Too Shabby”